(wm-pcp) 20 years ago, the author Wolfgang Maassen published the first volumes of a book series he called “Chronicle of German Philately”. At first, the idea was to publish annual volumes that would only record the relevant events of the last 150 years of philately’s development, but a few years later, “special volumes” emerged that portrayed individual renowned philatelists, professional philatelists, but also companies, clubs and associations in sometimes very extensive volumes. In the meantime, 35 volumes have appeared in this series, including some in both German and English (in total, the author has published over 100 philatelic book publications since 1980). Thus, in the “Chronicle of German Philately” alone, almost 9,500 pages – mostly in DIN A4 format – have been accumulated. If one adds the author’s philatelic historical works published by publishers other than his own, the total number of these works adds up to 43 with about 12,500 pages. Almost all volumes were written by the editor Wolfgang Maassen himself, but some were also written by other authors such as Peter Fischer or, most recently, Hervé Barbelin. Two books have co-authors. 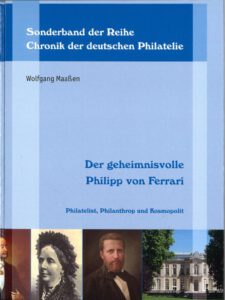 This book series, which is unique worldwide in terms of scope and content, will be on display in its entirety for the first time during IBRA 2023 from 25-28 May in Essen. Selected volumes will be on display in a small showcase, the complete series can be viewed on a book shelf. There will also be the opportunity to purchase titles that are not yet out of print on site in the reading and literature area of IBRA 2023 – and at attractive prices.

The Global Philatelic Network (Köhler/Corinphila) is presenting the Edition d’Or/Edition Special book series in showcases and on another shelf. Approximately 80 volumes (!) have been published so far in this most comprehensive series of unique collection documentations worldwide. Editions that are not yet out of print can also be purchased on site.

You can find out more about which cookies we are using or switch them off in settings.

This website uses cookies so that we can provide you with the best user experience possible. Cookie information is stored in your browser and performs functions such as recognising you when you return to our website and helping our team to understand which sections of the website you find most interesting and useful.

Strictly Necessary Cookie should be enabled at all times so that we can save your preferences for cookie settings.

If you disable this cookie, we will not be able to save your preferences. This means that every time you visit this website you will need to enable or disable cookies again.