(wm-pcp) Even the welcome page is strikingly different from the previous one. Instead of a static Bordeaux-Mauritius letter, one is now greeted by alternating pictures and short texts on the special shows of next year’s IBRA. Clearly arranged and almost tidy, the eyes wander below on essential focal points, some of which are already described now, but will then be filled with progress of the preparations: News, List of Exhibitors, Shop, Special Shows, Programme, International Stamp Fair. Now there is also the possibility (see “News”) to subscribe to a newsletter (see “Subscription to mailing list”), which is highly recommended, as up-to-date news will certainly be expected more frequently in the last months before the event.

The “special shows” mentioned are already to be found here: “Jewels of German Philately”, “100 Years of Inflation”, “German-American Salon”. In the first one everyone interested can exhibit his most beautiful or valuable piece on a sheet, which will later also be documented in a special book. That way, anyone can be an exhibitor at IBRA 2023. The detailed conditions can be found at https://ibra2023.de/juwelen/. 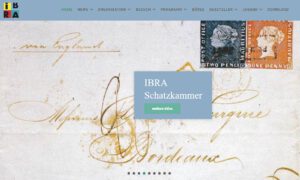 Yet, this is not all: you should also take a look at the other three items  under the heading “Special Shows”. The BDPh “Philately Centre” (ZENTRUM PHILATELIE) of the associations, will present a special show in 15 showcases around the theme “From the first collectors, dealers, clubs, associations, exhibitions until today”, which will have a lot on display (e.g. a letter of the verifiably first German collector). On approx. 120 exhibition sheets, one can see rarities and curiosities as well as highlights of German (association and club) philately of the last 150 years. Even the stand plan of the “Zentrum Philatelie” of the associations can already be looked at. In addition to the BDPh stand, there will also be the “IBRA stand” where visitors can purchase catalogues and books as well as commemorative covers and stamps.

Even the literature area shines, providing a small showcase display of old rare stamp albums from the 19th century and the more than 50 study groups guarantee a high-class information offer.

One thing is certain even now: the IBRA 2023 organising team is busy preparing further projects. The current German homepage will be translated into English in the coming weeks, so that this language version will also be available to all philatelists abroad from September. The registration deadlines for exhibitors are currently running until the end of September, and it is important not to forget this. BDPh exhibitors can send the completed application form to the National Commissioner, Frank Blechschmidt. Email BDPh.Kommissar@IBRA2023.de; all exhibitors from other countries please send their registration to the respective country commissioners.

You can find out more about which cookies we are using or switch them off in settings.

This website uses cookies so that we can provide you with the best user experience possible. Cookie information is stored in your browser and performs functions such as recognising you when you return to our website and helping our team to understand which sections of the website you find most interesting and useful.

Strictly Necessary Cookie should be enabled at all times so that we can save your preferences for cookie settings.

If you disable this cookie, we will not be able to save your preferences. This means that every time you visit this website you will need to enable or disable cookies again.